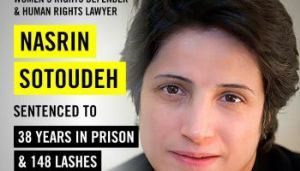 One afternoon, on a late spring day in 2018, a group of officers from the Iranian Prosecutor’s Office and the Ministry of Intelligence came and arrested me while I was home alone. They took me to Evin Prison in a green taxi. In absentia, I had been sentenced to five years in prison for my work as a women’s rights and human rights attorney. A few months later, seven more charges were added, and I was given a total of over 33 years in prison plus 148 lashes. The heaviest of these sentences was 12 years for “promoting immorality and indecency.”

Currently, I am in the women’s ward which consists of three rooms and forty inmates. Most have been arrested for political reasons. The occupants of Evin Prison’s women’s ward are human right activists, women’s rights activists, civil and environmental activists, religious minorities and mystics, members of labor movements, and individuals with dual citizenship who are accused of spying.

I spend my days exercising, making crafts, reading and having group discussions, besides attending to my own personal chores. Sundays are visitation days and if I’m not forbidden from visits, I can see my family.

In prison, I sometimes offer limited classes about human rights issues to those who are interested, but mainly, I preoccupy myself with learning and teaching others about truth and reconciliation commissions in other countries.

None of the Girls of Enghelab Street, the women who protested Iran’s compulsory hijab law by publicly removing their headscarves and waving them on a stick, are here. But a few of my cellmates are the young women who on International Woman’s Day last year went onto the subway in Tehran, spoke to passengers, and handed out flowers. In another move, this group had supported me by holding up my pictures in the subway. Because of this, they received heavy sentences, which deepens my sense of responsibility.

Iran is a country where violations of women’s rights are systemic. This makes it even more important to honor and commemorate International Women’s Day.

On this day, I am thinking about the years that have passed. The years of our silence and captivity; years of protest, bondage and the walls behind which we are trapped. However, I also am thinking about this year — a year of tragedy and illness for Iranian people. It’s the consequence of hostility and enmity coming back around to us. I keep looking back and reviewing the path we’ve taken. Where did we go wrong? Why didn’t we succeed? Why couldn’t our government govern properly? Why didn’t we know how to resist effectively and peacefully?

On this International Women’s Day, as a deadly virus sickens my country, I throw my hands down and as a citizen, in a gentle voice, I ask the government to end their animosity with the world, to look at the world through the eyes of peace and to trust life and human beings. I ask human right activists to help us in our peaceful endeavor.

I specifically extend my hand to American citizens. Our governments have been rivals for years, with little regards for us. On this day of March 8, I also ask every Iranian around the world to help us in our pursuit of peace, this fundamental aspect of survival. Happy International Women’s Day.

Sotoudeh is one of the Iranian women’s rights activists featured in “۴۰ Million,” a short documentary from director Jeff Kaufman for TIME. It can be viewed at the top of this page.